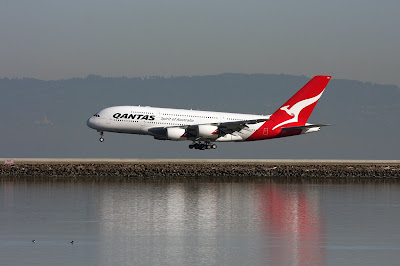 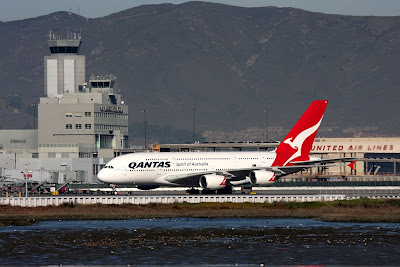 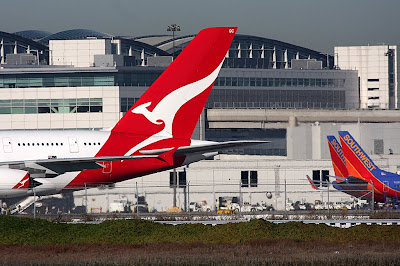 
Some other heavy jets arriving: 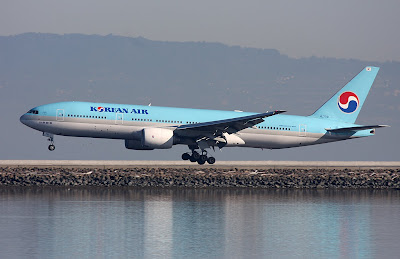 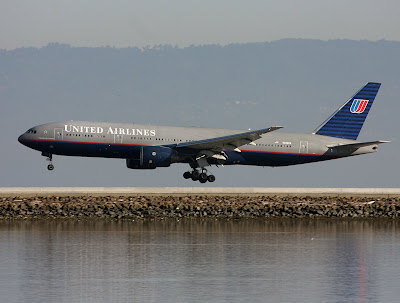 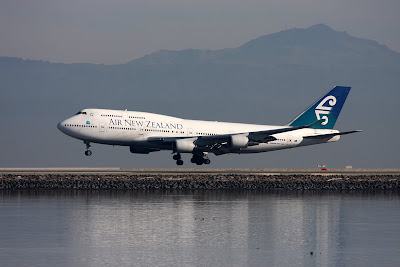 Todays Air New Zealand flight is a 747-475 arriving from Aukland.
The summit of Mt. Diablo in the background. 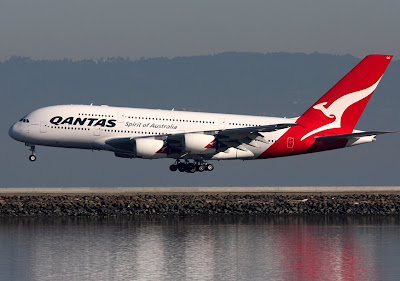 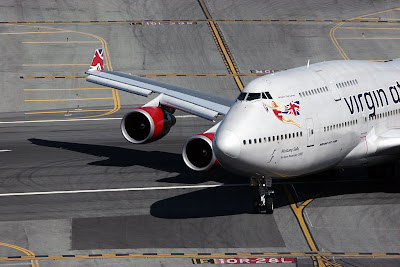 "Mustang Sally" is a regular at SFO. Arriving from London Heathrow they will turn around in about 2 hours to go back to London. 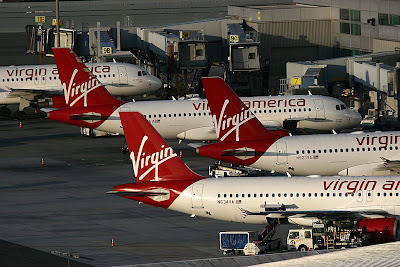 The morning Virgin America rush is loading up at International Terminal A.
"let there be flight" is at Gate 7. "san francisco pride" is parked at Gate 9B. 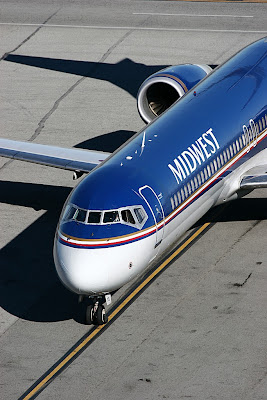 Midwest Airlines flies the Boeing 717 into SFO. Here they are taxiing on the ramp just about to turn into Gate 60.
Posted by Keith W at 8:53 PM No comments:

SFO is well known for its strong winds. You can pretty much expect 20 knots of wind on any given afternoon at San Francisco International. The wind usually blows in through "The Gap" from the Pacific Ocean to the west of the airport. Runways 28L and 28R are lined up well for the afternoon seabreeze, allowing pilots to land directly into the wind. An ideal situation. Usually the departures take off on runways 1R and 1L. The pilots must deal with a 20 knot direct crosswind. In the Spring it really gets windy. 280 at 30 to 35 knots is typical, 40 to 45 knots not uncommon. With these winds both arrivals and departures must use runways 28.

April 14, 2009 was a VERY windy day. It was blowing 280 at 48 sustained. At times it the wind got up to 55 to 58 knots steady. The gusts hit 65 knots. The control tower was swaying gently back and forth. The roar of the wind was loud inside the tower. 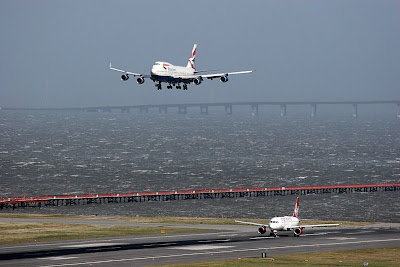 A British Airways B747 was on approach to 28R while a Virgin America Airbus was rolling on 28L. 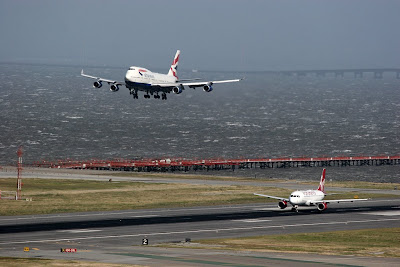 British Airways ("Speedbird") was rocking as they were on short final. Virgin America ("Redwood") began their takeoff roll. Look at the whitecaps on the Bay! 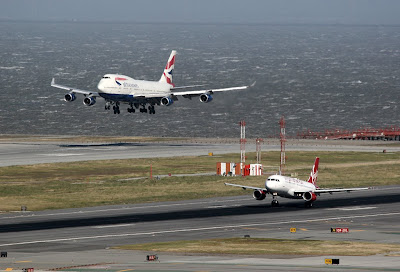 Redwood rotates really quickly. With a 50 knot headwind their speed over the runway is only about 100 knots. 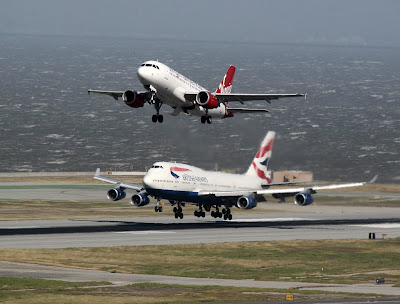 Redwood jumps into the air, climbing like a kite as Speedbird flares just a couple of feet above the runway. 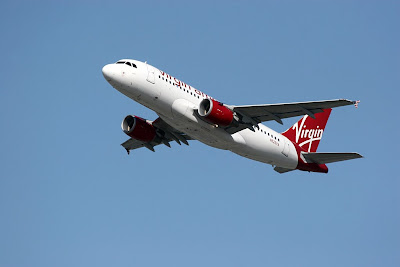 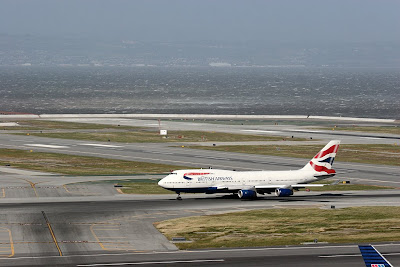 Speedbird slows to turn off the runway as a 65 knot gust passes just north of the airport. 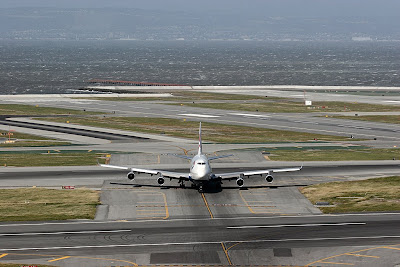 Speedbird turned off the runway onto taxiway Echo to wait for departing traffic. Notice the windsock at the left edge of the photo. It is straight as a board.
Posted by Keith W at 3:43 PM No comments: 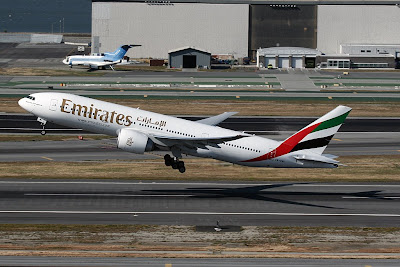 Taking off on RY28L for a 16 hour flight to Dubai. What a beautiful airplane. Boeing 777-200 LR. I really like the classy looking Emirates paint scheme too. Look at how much the wings flex lifting up all that fuel for such a long flight. 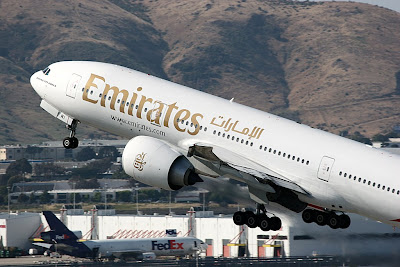 Airborne off RY28L bound for Dubai International Airport. Non-stop! Notice how the landing gear has rotated forward so that the wheels will fit into the wheelwells on retraction.
Posted by Keith W at 1:05 PM No comments: 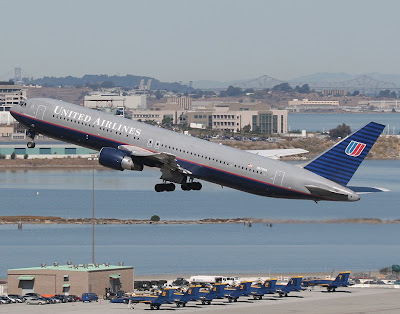